Last week I had the privilege to hang out with my friend Troy Castellano at his studio and do two very cool things:

Behind a microphone is one of my favorite places to be. I truly feel like I’m in my element in the studio. The demo came out so lovely with Troy’s production and he gave my voice a polish that makes it all shine!

The demo will go out to get pitched around the row to see if anyone is interested in recording it.

In the meantime, Troy and I performed the song on his web series, Project 52. You can check it out at the top and bottom of this post! (and Troy is singing with me which is the BEST THING EVER because his voice is INSANELY amazing)

The song is called “Lost Amen” and it’s written by myself, John Cirillo, and Troy Castellano.

In the writing room: How “Lost Amen” was written

The day we wrote it we went over to John’s place and John threw the title and the idea behind it into the room first. Right away, Toy and I both thought it was really interesting. We tossed out a few more ideas that day but I remember coming back to Lost Amen and thinking that it could be something really powerful.

Something I love about writing with the two of them – they want to write the best song. Not the catchiest, happiest, most candy-coated-sexy-happy uptempo song. The best song. The best idea in the room, no matter where it came from, what it’s about, or who we would pitch it to.

Lost Amen was definitely one of those ideas that I didn’t want to gloss over. It had the kind of depth that I crave these days.

And so we started there.

John had some lyrics in a google doc that he’d jotted down alongside the idea for Lost Amen.

I starting singing them in an improvised descending melody over Troy’s chords.

When we got to the chorus, Troy sang out the first line effortlessly, like it was written already. I couldn’t find it in the whiskey / I couldn’t see it through the smoke. I remember just shouting something like, “There it is! That’s the chorus melody.”

Some parts came easily, other parts we had dig out.

At the end of the session, we wound up with a song that we all felt carried a special weight.

It’s quickly become all of our favorite songs of the moment, certainly my top favorite song I’ve been a part of so far (John and I joke that we have a #1 because it’s currently out #1 favorite song we’ve written).

Here’s the interview (thanks for having me, Troy!) and our performance of the song.

Give Troy a subscribe on YouTube, you’ll find all sorts of amazing songs and artists on his channel – including loads of friends of ours.

Here’s our Project 52 performance of the songs and a little interview. 🙂 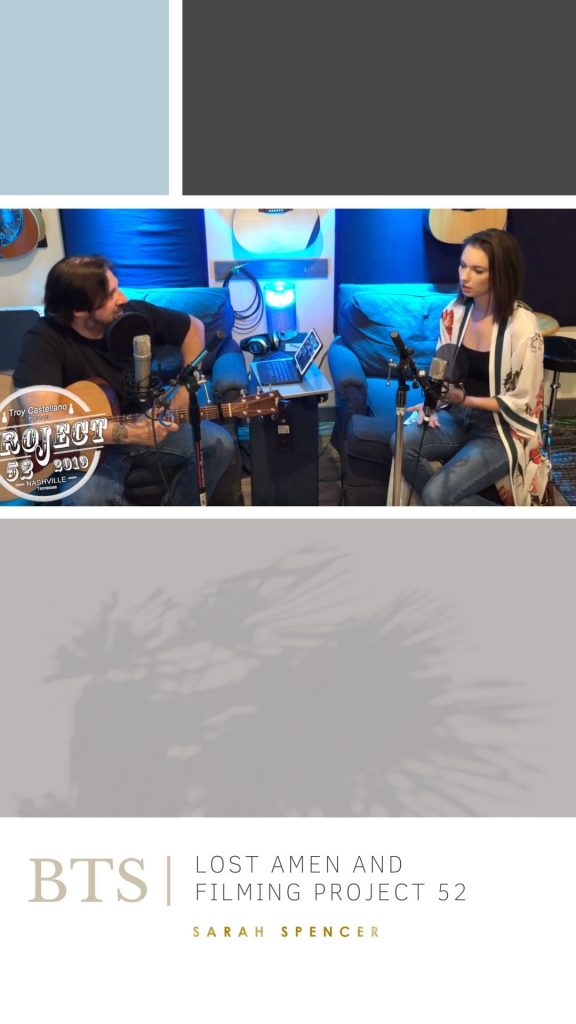